Children cough quite frequently. It’s just a symptom, which in most cases accompanies infection. It is important for the parents to be able to distinguish between types of cough. Of course, this knowledge does not eliminate the need to show the child to a competent doctor!
To determine the type of cough and its cause, it is necessary to analyze the answers to the following questions:

On what type of cough parents should pay attention: In these cases, you need to immediately seek medical help. Thorough examination of the child is advised.

Calling the emergency, even at the slightest sign of the disease is required for all children under one year, children with serious chronic illnesses, as well as the presence high temperature (above 38 ° C) or shortness of breath.

Most often, the child starts coughing after a cold had started Even if the baby is already able to blow the nose, mucus continues to flow down the walls of the throat, gets into the upper respiratory tract, and the child begins to cough up the foreign liquid.

ENT doctor, MD, Professor Yuri Ulyanov confirms this observation: “Indeed, mucus causes coughing. Not only professionals should be aware that the state of the throat, trachea and bronchi are 100 percent dependent on whether there is a violation of the nose. Cough reflex protects of the respiratory tract from the threat. Therefore, if a child has a runny nose and cough is present, it is necessary to treat a cold. Cough will go away itself if the proper treatment of disorders of the nose is prescribed”

And that is why, for any, even seemingly harmless rhinitis you need to show the child to the pediatrician, namely the ENT doctor. Only he can look inside the nose and adequately assess his condition!

The pediatrician also will listen to your child’s breath and say whether there is wheezing in the lungs, or the focus of inflammation is higher.

If the upper respiratory tract is inflamed, the cough is a symptom of laryngitis or tracheitis 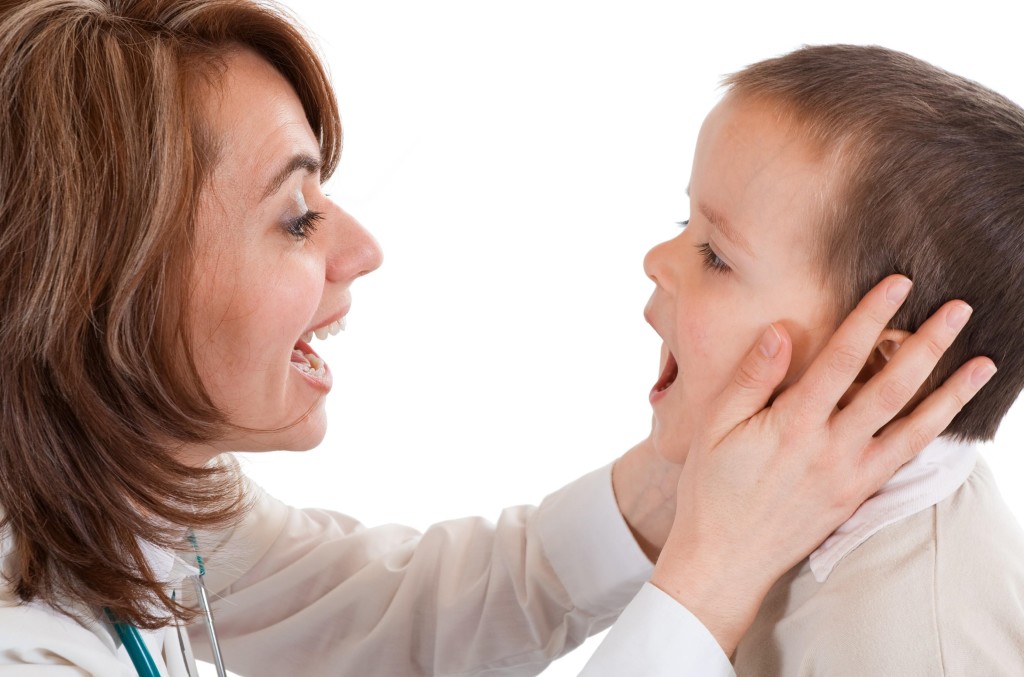 Laryngitis is accompanied with the appearance of dry mouth, sore throat, later the child isperiodically hit by a dry cough. The child may grow hoarse voice or even an abyss. Laryngitis can cause a condition called false croup. The child’s lower throat is inflamed and swells, it builds up the mucus. Due to the narrowing of the air passages and barking cough occurs. Typically, the croup at night. inhalation using special instruments and cool air helps ease the condition.

See Also:  Sore throat and cough during pregnancy and its treatment

Sometimes the cough lasts from 8 to 14 days. At the same time by he end of the first week of cough is not just does not cease, it continues to grow and becomes a barking, paroxysmal. This is a sign of whooping cough, the disease caused by Bordet-Zhang. In this case, the cough is necessarily accompanied by deep breath with a characteristic twang. The phlegm may be pure. This cough may cause vomiting. The child’s face and eyelids become puffy, swollen. It is necessary to immediately show the child to the doctor!

Doctors are unanimous in the opinion that you can not suppress the cough!

Do not give children medicines that enhance this effect, directed at the violent termination of coughing.

Vladimir Tatochenko, pediatrician, MD, professor, clearly believes that you must not fight the cough, “Cough is created by the Lord God to cough up all the excess that is in the lungs. Imagine that a child who has pneumonia or bronchitis, there is a lot of mucus – and then suddenly he stops coughing. All this mucus clogs the bronchi! So, we should not stop the child from coughing and clear his throat”

When inflammation occurs in the bronchi, phlegm is formed in them. Germs and bacteria dissolve in the mucus. However, body takes it all out by coughing. The bronchi are released, and the inflammation goes away. The man stops coughing.

Domestic steam inhalation of the potatoes, herbs, etc. will not help your child So says Vladimir Tatochenko. “One cubic meter of the steam contains 100 milligrams of water. It does not moisturize anything and nothing helps the coughing. Particles of water simply settle in the mouth – they do not reach the bronchi, “- said Vladimir -” When you cough is associated with obstruction, a conventional nebulizer is well-used. The device creates a constant flow of hot particles of medicines. They are sprayed into the deepest sections of the bronchi and lungs, and also in the sinuses. Thus, the drug begins to act immediately ”

If the phlegm is very viscous, it should be liquefied. And it is not necessary to buy pharmacy mucolytics. You can get the same effect the old-fashioned way: drinking tea with raspberry, milk and mineral water, milk with soda, warm water with honey and lemon. By the way, scientists have proved that if you give a child two teaspoons of honey at night, it will almost completely eliminate the night cough. It is necessary to drink warm fluids as much as possible: at least a little, but often.

TopWellnessLife
← Previous Story Dark spots, red marks and acne scars – how to get rid of them
Next Story → Rh factor and Rh-compatibility during pregnancy